skip to main | skip to sidebar

Welcome to my blog 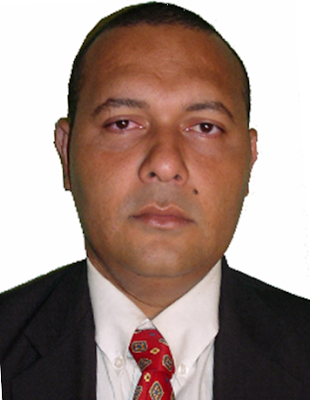 Tok Pisin: Papua Niugini, officially the Independent State of Papua New Guinea, is a country in Oceania, occupying the eastern half of the island of New Guinea and numerous offshore islands (the western portion of the island is a part of Indonesian provinces of Papua and West Papua). It is located in the southwestern Pacific Ocean, in a region defined since the early 19th century as Melanesia. Its capital, and one of its few major cities, is Port Moresby. It is one of the most diverse countries on Earth, with over 850 indigenous languages and at least as many traditional societies, out of a population of just under 6 million. It is also one of the most rural, with only 18 per cent of its people living in urban centres.[5] The country is also one of the world's least explored, culturally and geographically, and many undiscovered species of plants and animals are thought to exist in the interior of Papua New Guinea.
The majority of the population live in traditional societies and practise subsistence-based agriculture. These societies and clans have some explicit acknowledgement within the nation's constitutional framework. The PNG Constitution (Preamble 5(4)) expresses the wish for traditional villages and communities to remain as viable units of Papua New Guinean society,[6] and for active steps to be taken in their preservation. The PNG legislature has enacted various laws in which a type of tenure called "customary land title" is recognised, meaning that the traditional lands of the indigenous peoples have some legal basis to inalienable tenure. This customary land notionally covers most of the usable land in the country (some 97% of total land area);[7] alienated land is either held privately under State Lease or is government land. Freehold Title (also known as fee simple) can only be held by Papua New Guinea citizens.[8]
The country's geography is similarly diverse and, in places, extremely rugged. A spine of mountains runs the length of the island of New Guinea, forming a populous highlands region. Dense rainforests can be found in the lowland and coastal areas. This terrain has made it difficult for the country to develop transportation infrastructure. In some areas, planes are the only mode of transport. After being ruled by three external powers since 1884, Papua New Guinea gained its independence from Australia in 1975.

Morobe Province (previously named Adolfhafen in German New Guinea) is a province on the northern coast of Papua New Guinea. The provincial capital is Lae. The province covers 34,500 km², with a population of 539,725 (2000 census). There is also Huon Peninsula. The province has 9 administrative districts and 171 languages are spoken.

Morobe
Statistics
Capital: Lae
Area: 34,500 km² (4th)
Districts:
Bulolo District Finschhafen District Huon District Kabwum District Lae District Markham DistrictMenyamya DistrictNawae and DistrictTewae-Siassi District.
The Morobe Province is situated on the north coast of PNG mainland around the Huon Peninsula. It is one of the populous and diverse province interms of culture and geography. Inland Morobe is known for its agriculture and farming. Forestry and logging in the Wau Bulolo area once the home of miners during the gold rush history. Higher up is Garaina known for its organic tea production. The Markham Plains produces mainly cattle and laterly rice farming. From Kabwum one can travel to Sialum down the coast to Finschafen and by boat to Lae. Salamoa is further down the coast from Lae city.
Home to Papua New Guinea University of Technology, Wau Ecological College,Balop Teachers College and other educational institutions, Morobe Province contributes immensely to PNG human resource development.
Lae is the industrial urban town in PNG. Manufacturing and steel industries as well as storage and transport services provide support to firms and companies operating in the highlands provinces. Lae city is link by road to Madang, Eastern Highlands to Western Highlands and others.
In the center of PNG the Lae Port is the bussiest in the country and is vital to the PNG economy.
Morobe Provincial Assembly (Tutumang) comprises 28 local government presidents and 9 members of National Parliament representing the 9 districts in the province. The provincial member for Morobe, Hon. Luther Wenge is the governor and chairman of the Provincial Executive Council. The province total population is 539,404.
Morobe's biggest obsticle to development is the province geography. From ruggered mountains to flood plains, Markham River, Busu, Wasu, wet season, floods, landslide and rough seas you name it all, here in the land of the unexpected mother nature still has the upper hand.


The current Provincial Governor of Morobe 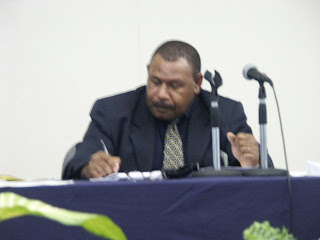 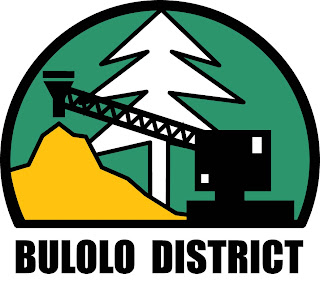 Bulolo is a town in the Morobe Province of Papua New Guinea. It was once an important gold dredging centre in the former Territory of New Guinea, situated on the Bulolo River, a tributary of the Markham River, about 32 km (20 mi) north-west of Wau.
Currently, the town's major industries includes forestry, with the PNG Forest Products Limited the main enterprise. There is also an Insect Farming and Trading Agency, which promotes insect farming and conservation.

History
Dredging for gold was began on March 21, 1932, with the whole of the 1,100 ton dredge (No 1 dredge) transported to the field in pieces by air from the port city of Lae. The largest single part was the main tumbler shaft, 12 feet long and weighing 6,870 pounds. Construction of No 2 dredge was underway before No 1 dredge was completed. In all eight dredges were constructed and operated, the last going into operations in 1939.
Dredging operations were interrupted by the war in 1941, and were not resumed until six years later. Gold production in 1952 amounted to 122,035 ounces, valued at £1,311,241, and constituted 77 per cent of the gold produced in New Guinea in that year. As the gold petered out the dredges were abandoned and they can still be found along the Bulolo river bed.
Bulolo was the headquarters of a company formed to exploit the pine forests that grow in the valley. In conjunction with the milling of timber an extensive scheme of re-afforestation was undertaken to ensure perpetuity of supplies.
Since the 1950s Bulolo has been connected to Lae by a vehicular road along the Bulolo and Markham River valleys.

Further reading
Idriess, Ion L. (1933). Gold-dust and ashes: the romantic story of the New Guinea goldfields. Sydney: Angus and Robertson. - The story of the great gold dredging endeavour.
Sinclair, James (1978). Wings of gold: how the aeroplane developed New Guinea. Sydney: Pacific Publications. ISBN 0-85807033-2. - An excellent resource where Sinclair acknowledges and credits the research and recollections of Ian Grabowsky, a prominent figure in early aviation in both Papua New Guinea and Australia.
External links 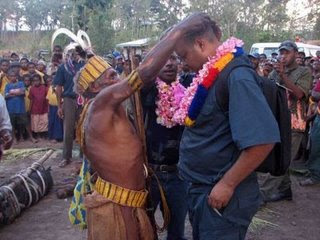 Watut elders appreciating their new ambulance for the Upper Watut Local Level Government. Upper Watut is one of the six LLG areas in the Bulolo District.
Photo by Malum Nalu.